Tintin an Tarrie follae a series o byordinar clues that pit them on the trail o a dangerous drugs cartel. In their pursuit, Tintin is steekit i the hold o Captain Haddie’s ship, the Karaboudjan – whaur the captain is sair hauden doon by the bottle an keepit i the pooch o his crew. Wi the sweltry Sahara on the ae side an the wattery deepths o the Mediterranean Sea on the tither, this adventur fair pits the lives oTintin an his freens in deidly danger… 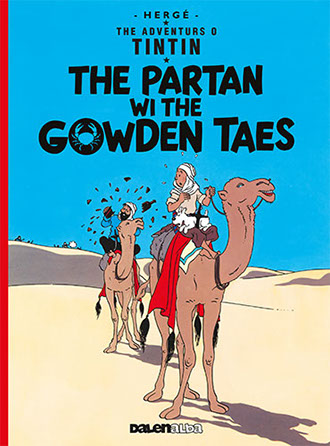 Tell us whaur ye are – we’ll add the relevant

Tintin and Tarrie follow a series of strange clues which lead them on the trail of a dangerous gang of drug smugglers. In their pursuit, Tinitin is locked up in the brig of Captain Haddie’s ship, the Karaboudjan, where the captain is under the influence of the bottle and under the thumb of his dastardly crew. With the scorching Sahara desert at one hand and the depths of the Mediterranean on the other, this adventure places Tintin and his friends in some dangerously dire straits.

Published with support from Creative Scotland